Actions in Rivery Logic can be useful when there is a need to communicate with any REST service during the Logic’s run.
This includes:

Why Use an Action Step in Logic Rivers?

Imagine a case where you have a table which contains information about marketing campaigns, and there is a need to open a support ticket in Zendesk service for any campaign that reaches a certain 'low limit' of performance.

In a Logic, you can first create a step to query all of the campaigns that have 'low performance' and save this into a variable. Then, for each campaign you call an Action that sends a REST API request to open a Zendesk ticket for that particular campaign.

Add An Action Step to a Logic River

Add a new Logic step using the button Add Logic Step at the bottom of the Logic screen.

In the newly added Logic step, click on the list in the top-left corner and select an Action.

If the Action river already exists, select it from the dropdown. If not, click the New Action button to create one. See here for guidelines on creating Actions.

Once an Action is selected in the Logic step, its input and output variables will be available in the step.

In the following example, there is a Logic River with two steps.

The first step calls an Action that connects to the Mixpanel API and returns an array of events data into a variable. The second step uses this array and sends a variable to another Action. 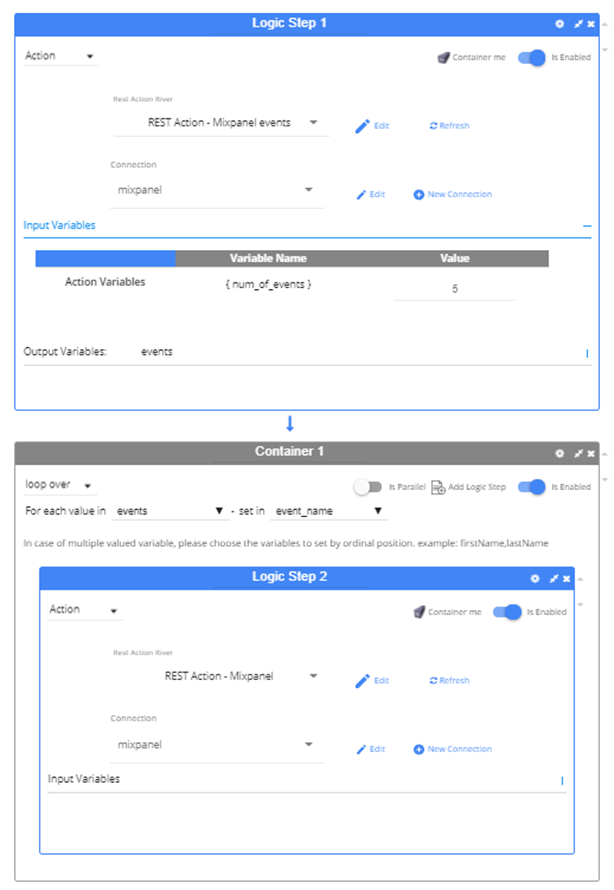 Pass Variables to an Action Step in a Logic River

Select the required Action in the Logic step.
If the action has some variables (that are not private), all of the variables will be visible under its Input variables:

If the variable has a value that was configured in the Action, it will be visible here.
Insert any other value to pass to the action. It is also possible to pass in Logic variables (see example below).

Example: Send a Logic Variable to an Action Step

In the following example, a Logic variable called “event_name” is sent to the Action variable “event”. The rest of the input variables of the Action are not filled out, meaning the Action will run using its original variable values.