Logic Rivers are so-called because a logical data model defines the structure of data elements as well as the relationships between the Rivers.

Logic Rivers are used for data transformations and workflow orchestration, and they can contain other Rivers within them.

You can select your Logic stp type using the drop-down list in the logic step's upper left corner.

Each logic step type is a different task type.

The 'SQL / DB Tranformations' option allows for in-database transformations using a query or SQL statement (the SQL syntax to be used is that of your cloud data warehouse).

First, select your desired cloud database and set the connection.

Next, enter your query into the 'SQL' box. You can click the magnifying glass to enlarge the space where you can view the query.

After the query has been pasted into the Source section, it's time to decide on the desired target. In 'SQL / Script' logic step types, Rivery can store the results of the source query into a database table, variable, or file storage. 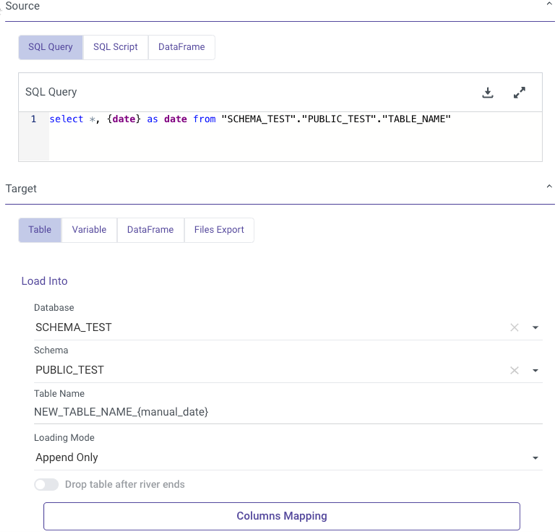 When storing data into a database table, you can choose between three loading modes: Overwrite, Upsert-Merge, and Append Only.

If you choose to use Upsert-Merge functionality, you can define your merge key by clicking into the Column Mapping (at the very bottom of the logic step) and highlighting the key indicator for the desired field. You may need to first select 'Auto Mapping' to fetch your table schema.

The next option for storing data into a target is file storage. The type of file storage allowed will depend on what cloud connection you are using. The supported file store options are Amazon S3, Google Cloud Storage and Azure Blob Storage.

For this option, enter the bucket you wish to save the results as well as the desired file name. By scrolling down, you'll see more options to customize by file type, delimiter (for CSV) and compression.

Lastly, the 'SQL / Script' logic step type provides the ability to store data values into variables which can be called downstream in the Logic River.

In a SQL/Script logic step, variables can be saved at the river level or global level. A river variable will allow for dynamic passing of values from step to step within the same logic river session. A global variable enables the passing of values into an account-level variable, (found on the 'Variables' page in left-hand panel) which can then be used in other rivers.

The 'River' option of a logic step will trigger the selected river to run.

For example, the logic step above will trigger an existing river in our account called 'FB ads' which pulls ad data from the Facebook Ads connector.

The 'Action' logic step will trigger an existing Action river in your Rivery account. Action Rivers allow for custom REST calls to any API on the web.

Once the desired Action River is selected, any inputs corresponding with the river will appear for enhanced customization.

For a more in-depth walkthrough of Action Steps in Logic Rivers, see the Action Step documentation.

This feature is a part of the Logic River type, which enables you to easily build a data transformation process using steps, variables, containers, conditions, loops, actions, and River runs.

Please refer to our documentation on Python for additional details.

The Condition logic step type allows for enhanced conditional capabilities in a Logic River. Upon selecting this option, a user interface for applying a condition to a logic step will appear. 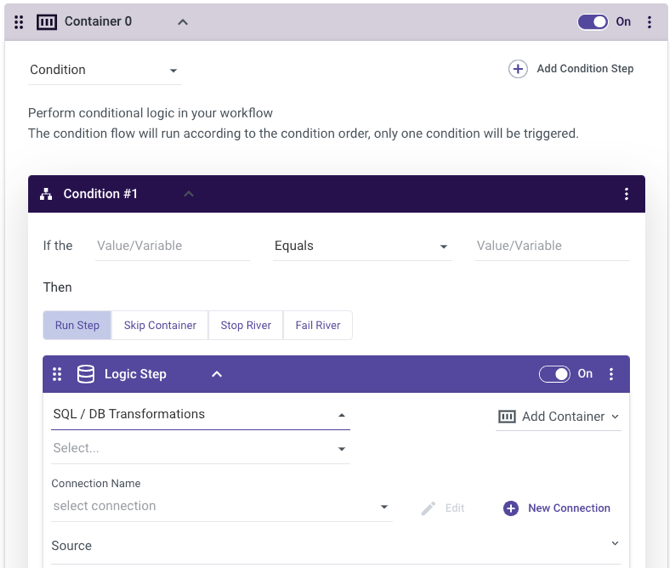 Here you can enter a static value or existing variable for which your condition to meet. Based on the results of the condition as its processed, you can choose to run a step, pass over it, stop it, or fail the river.