What Are Multi Actions?

Multi-Actions are rivers that consist of multiple Actions.

The Multi-Action runs the actions in the order they appear in the flow and can pass variables between actions.

Many REST APIs require multiple steps in order to connect to the service, and GET/POST requests.

Click on Create New River from any screen in Rivery and select the Action option.

An action in Rivery can be Multi-Action or REST Action . 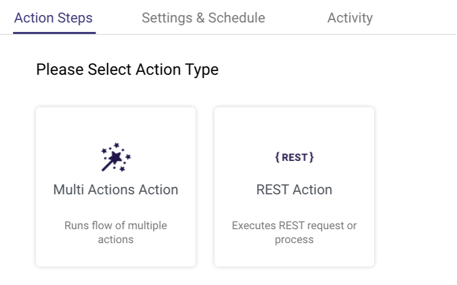 Multi-action is an action which is composed of multiple actions and allows to run a process of actions in Rivery.

Click on Rest Action in order to proceed to the REST Action screen.

Create or select an existed custom connection.  It is possible to leave the connection empty in case it is not required.

The variables of the Rest action are available in the button on the right side of the river:

Insert as many variables as required to the variables of the Rest action.

Use the Variables in the inputs variables of the actions inside the multi-action by entering “{“. Then, a list of all available variables will be presented.

Click here to read more about variables in Actions.

The time period is the place to configure the start date and end date of the Multi-action and is available on the right side button of the time period. 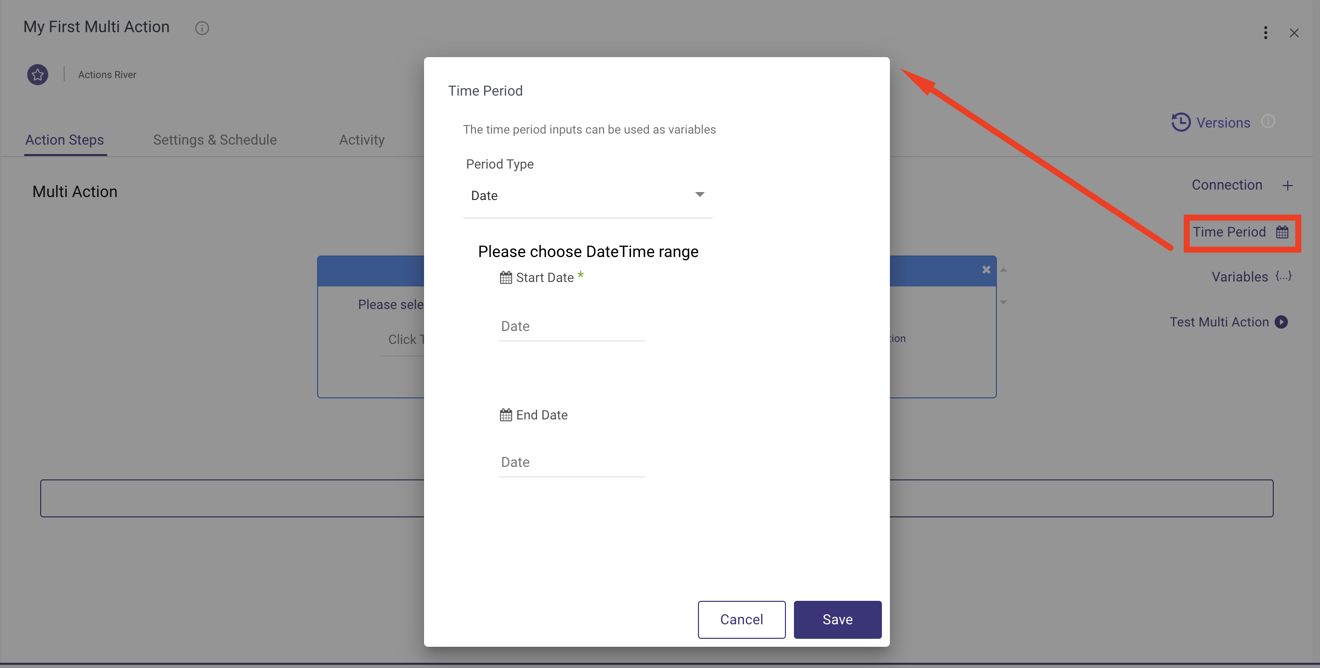 Add An Action to the Multi-Action Process 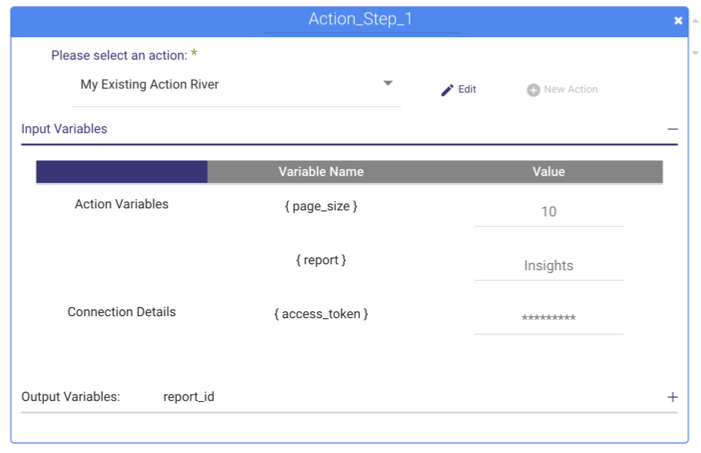 Insert variables by entering {} in the input.

Leave any value empty in order to run the action with its original variables values.

Click on the Add Action step at the bottom of the screen to add a new step in the Multi-action.

Pass variables between actions in a Multi-Action

The most common usage of Multi actions in Rivery is passing variables between actions that are being run in the Multi-Action.

In order to pass variables between actions the Multi-action has to include:

Follow the next instructions in order to pass a variable between actions in a multi-action:

Select or create an action in a step in the Multi-action.

That action must have results type variables and configured variables to return.

After selecting that Action, the step that contains that action will have output variables: 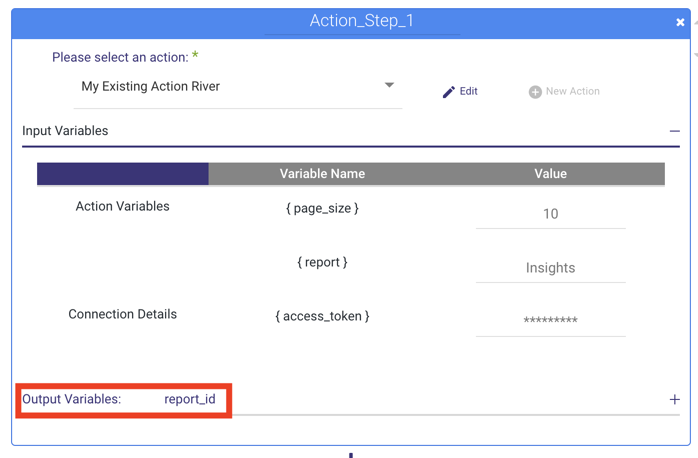 In that example, we created an action that connects to Facebook API and creates a report.

That action returns a variable called “report_id”, to be used in the next actions of the multi-action.

When an action inside a multi-action has public variables, the step that contains that action will have input variables :

That action needs to receive that report_id from the first step of the multi-action.

The action has a variable called “report_id” that was configured inside that Action. When clicking on the “input variables” of the step, all the public variables of that action will be visible:

Any variable that has a value in that action will present its value (unless it’s a password).

In that example, we didn’t insert a value to the report_id variable in the action, so it shows an empty value.

In order to pass a value to the variable, all we have to do is simply insert any value in the value input of that variable. That value can be a hardcoded value or a variable. In that example we passed the variable {action_step_1.report_id} to the report_id variable of the action.

When the multi action will run, it will populate the variable Action_Step_1.report_id with a value during the run of the first action, and then will pass this value to this action.

When the Multi-action is ready, it is recommended to test it before saving it and using it in other rivers in Rivery.

In order to test the Multi-action, click on the Test Multi-Action on the right side of the multi-action: 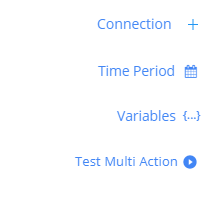 When the Multi-Action runs, each step that is currently running will have a moving green light.

If the step succeeded its color will turn to green.

If the step failed its color will turn to red.

The multi action stops running in case that any of its steps failed.

In both cases, it is possible to see the results/error of the action by clicking on the button in the top-left corner of the step in the multi-action.

In the next example, the first step did succeed and the second step failed:

When we click on the button in the top-right corne r of Action_Step_1 we see the results of this step. The results contain the variable that this action returns:

When we click on the button in the top-right corner of Action_Step_2 (Failed) we see the error that this action received when trying to run:

This error indicates that the Action runs without a valid value in the report_id variable, and it was sent empty to the Facebook API.

After successful testing, the multi-action is ready to be executed.

The multi-action can be executed by itself- using the Run button or using the scheduling , or by a REST River.

When running the Multi-Action using the Run button, it will run exactly like in the testing.

The summary of the results of this multi-action will be: