The Logic Step of 'SQL / Script' enables for in-database transformations to be performed using a query or a script (the SQL syntax to be used is that of your cloud data warehouse).
A SQL script is a collection of two or more SQL statements, as opposed to a SQL query, which is a single statement. The goal of a SQL script is to combine similar statements in order to accomplish a more complicated edition in the database.

To Expand & Preview Results click the diagonal arrows in the SQL field:

The Result tab displays the output of your SQL script/query.
Click Run to view the output:

When the output reaches the maximum of 500 rows, a notification appears.

A compilation is the process of optimizing the query execution plan.
When variables are used in the query, the real value will be displayed in the compiled SQL tab.
'Compiled SQL' can only be used for SQL queries, not SQL scripts.
Here's an example: 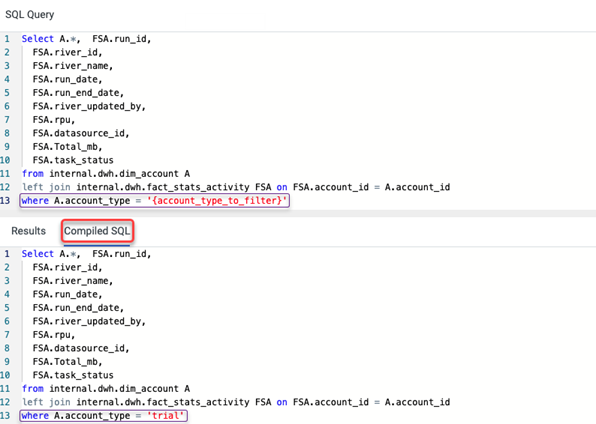 To make things easier, the preview window may be moved and scrolled:

The SQL query can be downloaded to your local computer.
Click on the arrow pointing down in the upper right corner: