Versions are saved instances of a River.

Whenever the rivers' configuration is changed and then saved (or manually executed) a copy of that river is saved as a version.

There are two types of version: regular and bookmarked, we will go into further details regarding the differences in the Version types section below

You can view all the saved versions for a river by pressing the versions button on the top right corner of the river.

Each version contains the following details: 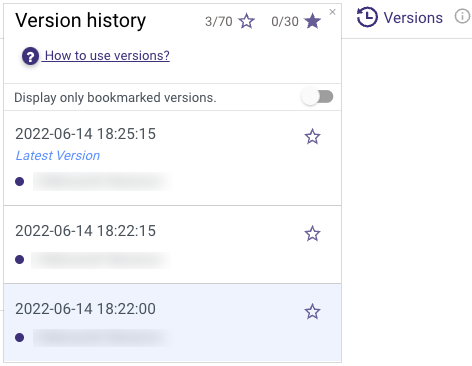 Pressing on a version from the list will show the definition of the saved version on the current river. This is a read-only mode and you can't make any changes to the versions while in this mode.

As previously mentioned there are two types of version: regular and bookmarked.

Regular versions are the default versions and are saved automatically.

Once you've reached the maximum number of versions for a river each new saved versions will delete the earliest version created.

To set a version as bookmarked press the star button next to the river version.

Alternatively, you can manually un-bookmark any other bookmarked version by pressing its star button instead.

You can give the version a meaningful name by pressing the edit button.

If you've pressed the edit and saved the version, it will automatically be bookmarked as well.

A bookmarked version is notated with a full star.

To restore a version, select a version to restore to from the river version list and click on it.
The saved version will show in the current River display.

Select the Restore to this version button to restore the version.

If the maximum number of versions allowed is met when restoring a version, the earliest version will be deleted automatically.

What parts of a river configuration are not stored in versions?

Changes made to following items in a river won't cause a version to be created and will always restore to the current river: